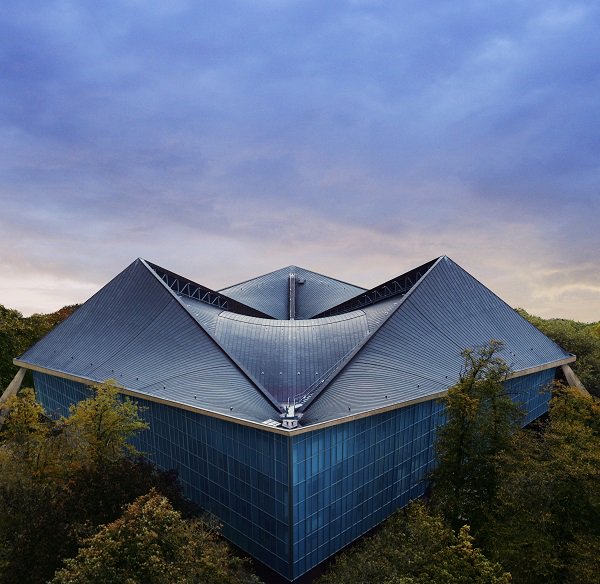 On Thursday 24th November the long-awaited Design Museum opens in Kensington on the site of what many of our generation will remember as the Commonwealth Institute. Designer, John Pawson www.johnpawson.com and Dutch architecture practice, OMA www.oma.eu , restored the original shell of the 1960’s Grade-II listed building, including its iconic copper-covered, hyperbolic paraboloid roof.

Time Out’s Stephanie Hartman tells us six reasons to be excited about it:

On 30th November, the museum will host the 20th International Designer of the Year Awards, started by Martin Waller in 1996.  In 1978 Martin Waller launched his luxury interiors brand, Andrew Martin www.andrewmartin.co.uk the beginning of a design empire that now distributes his exotic range of fabrics, wallpapers, furniture and home accessories to 63 countries.

Now in it’s 20th year, and described as the bible for the interior design world, the influential Interior Design Review book annually publishes the very best work from entrants.

To draw attention to the fact that design contributes £71.7 billion to the UK economy and is one of our major exports, High50 asked Martin Waller to pick his five top interior designers for 2016:

A legend of design whose wonderful personality imbues his work with an effervescent joie de vivre but always controlled within the parameters of his perfect taste.

In the noble footsteps of Axel Vervoordt, Vincent pares back his interiors until every piece has resonance and purpose .

A prophet of the simple life.  An expression of escape from the rigours of urban life. Crumpled and somehow luxurious at the same time.

Chou-Yi expresses many of the facets of the new vernacular of Chinese design: an emphasis on dynamic wall and ceiling finishes , powerful centrepieces , water features and thought provoking lighting that emphasises the shadows.

This website uses cookies to improve your experience while you navigate through the website. Out of these, the cookies that are categorized as necessary are stored on your browser as they are essential for the working of basic functionalities of the website. We also use third-party cookies that help us analyze and understand how you use this website. These cookies will be stored in your browser only with your consent. You also have the option to opt-out of these cookies. But opting out of some of these cookies may affect your browsing experience.
Necessary Always Enabled
Necessary cookies are absolutely essential for the website to function properly. This category only includes cookies that ensures basic functionalities and security features of the website. These cookies do not store any personal information.
Non-necessary
Any cookies that may not be particularly necessary for the website to function and is used specifically to collect user personal data via analytics, ads, other embedded contents are termed as non-necessary cookies. It is mandatory to procure user consent prior to running these cookies on your website.
SAVE & ACCEPT